In 2021, 82% of EEI member companies increased their dividend rate.

To better serve customers and investors, the Edison Electric Institute (EEI) and the American Gas Association (AGA) developed an environmental, social, governance, and sustainability (ESG/sustainability) reporting template, with the goal of helping electric and gas companies provide the financial sector with more uniform and consistent ESG/sustainability data and information.

Millions of Americans from all income levels and age groups own stocks that pay dividends. And dividends are an important component of shareholder value for the investor-owned electric utility industry. Today’s low dividend tax rates make dividend-paying companies, like electric companies, more attractive to investors. This helps to increase the value of utility stocks and lowers the cost of capital, which is critical for electric companies during this time of elevated capital expenditures.

On January 1, 2013, Congress passed the American Taxpayer Relief Act of 2012, which prevented the nation from going over the “fiscal cliff.” As part of this legislation, dividend tax rates, which would have reverted to ordinary income tax levels in 2013, were kept low and were permanently linked to the tax rates for capital gains.

The top tax rate for both dividends and capital gains is now 20 percent for couples earning more than $501,600 ($445,850 for singles). For taxpayers below these income thresholds, dividends and capital gains will continue to be taxed at the current rates of either 15 percent or 0 percent, depending on a filer’s income level. [Starting in 2013, a 3.8-percent Medicare tax that was included in the 2010 health care legislation will be applied to all investment income for couples earning more than $250,000 ($200,000 singles).]

The continued low dividend tax rates remain important to the industry’s ability to attract capital for investment in emissions reduction, new transmission lines, distribution upgrades, and new generation in many power markets in the years ahead.

END_OF_DOCUMENT_TOKEN_TO_BE_REPLACED

On December 20, 2017, Congress passed the Tax Cuts and Jobs Act, completing the most comprehensive overhaul of the U.S. tax code in more than 30 years. The final legislation included the electric power industry’s top priorities and several other provisions that will benefit electricity customers and encourage much-needed investments in smarter energy infrastructure.

Excess Deferred Taxes – What Does the Future Hold?

END_OF_DOCUMENT_TOKEN_TO_BE_REPLACED 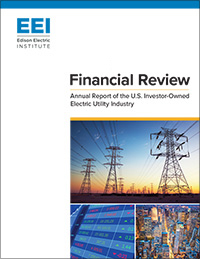 Policy Committee on Finance
Determines and recommends policy in the areas of accounting and finance, rate regulation and competition, and taxes.